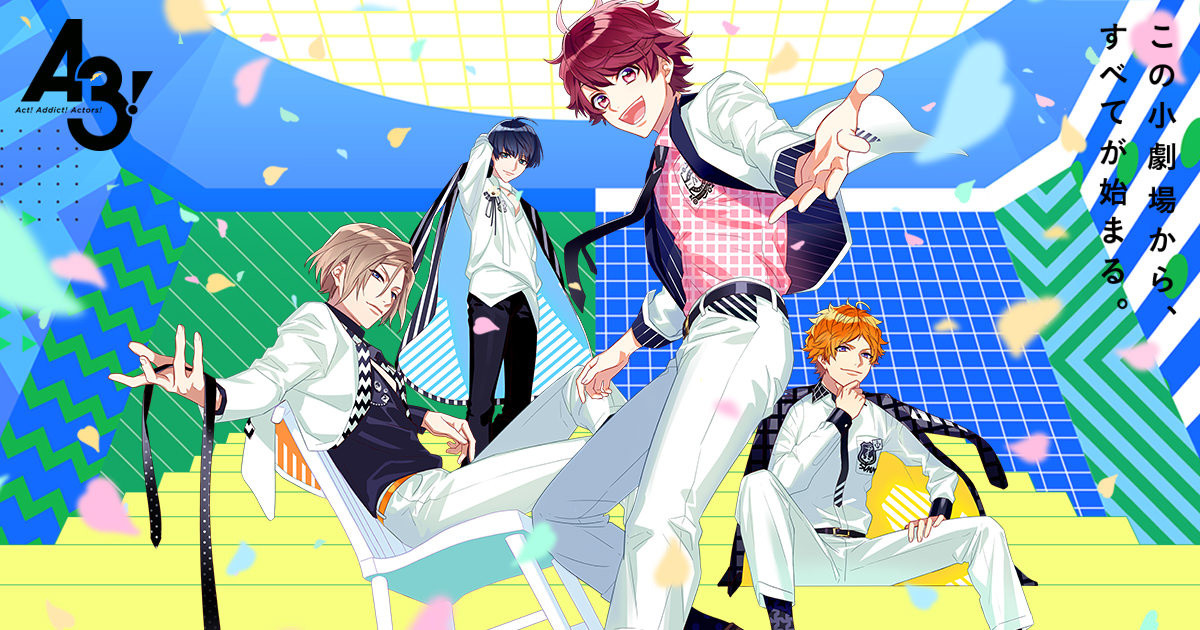 A run-down theater, crippling debts, and just one actor remaining - can you turn this situation around and help Mankai Company to bloom?

A3! (Act! Addict! Actors!) is an “ikemen actor raising” game available for iOS and Android. Developed and published by Liber Entertainment, it began service on Jan. 27, 2017, and has racked up over 5 million downloads as of Mar. 2018. Its success has led to a manga adaptation and fittingly, a “2.5D” stage play. Feb. 2018 also saw the release of "Act 2", an update that added four chapters to the main storyline along with new characters.

At first glance, the main draw of A3! is, of course, its abundance of rather handsome characters. However, it has also been praised for its variety of fully voiced storylines, which immerses players in their mission to boost the actors’ performances while exploring their diverse backgrounds and relationships.

Once a renowned theater company, Mankai Company is now in dire straits with just one actor, no audience and a whopping 10 million yen debt. As a former stage actress and the daughter of Mankai Company’s missing founder, it’s up to you to step in and bring it back to life as its new president and general manager! To do that, though, you’ll need to revive the company’s four traditional troupes and attract an audience by producing stage plays - or else, the yakuza will be all too happy to bring it all down.

One year later, a new curtain has risen on Mankai Company, as well as you and and its actors, who have gone through thousands of hours of practice and countless trials together. In Act 2, it's time to welcome new friends, new challenges, and many more amazing performances.

Aside from the player, who is given the role of Mankai Company’s president and general manager, at the beginning the main characters are split into four all-male troupes consisting of five main members (six for Act 2) and three ensemble members. Each specializes in a certain genre, and you will be able to interact with all of the units and learn more about individual characters while proceeding through the game.

In addition to their money troubles, the Mankai Company boys must also contend with a rival, a renowned troupe named God Seat. Known for its extravagant performances, it is led by president and director Kamikizaka Reni and boasts the talents of elite actor Asuka Haruto.

The game is centered around developing the talents and relationships of each troupe’s members, who are represented by cards. To achieve this, you can send actors to practice for a certain amount of LP and increase experience, skill and friendship, as well as attract items and sometimes even new members. A variety of different practice types are available and each has its own missions to clear, which will be rewarded with diamonds.

Once you’re ready to show off the results of your hard work, it’s time to hold a performance starring a unit of members hand-picked by you. No matter which troupe’s play you decide to perform, you have the ability to cast any actor as long as you own a card of them. However, a certain amount of points (gained from training) is required to pull off the play, meaning that it’s vital to keep on nurturing their talents.

Although A3! is a free-to-play game, players are able to obtain additional diamonds through microtransations. Diamonds allow you to take your chances with a gatcha that could give you cards, which will add new actors to your pool or be used to “Bloom”, or level up existing cards. You can also replenish LP and SP and purchase more card slots with diamonds.

A3! also often holds in-game events and campaigns, usually coinciding with the actors’ birthdays. There are also mini games, extra stories, bonus illustrations and songs to enjoy aside from the main storyline, making for a diverse experience. However, due to its voice-heavy content, players should be advised that the app will consume a fair amount of data.

Although A3! is currently available only in Japanese, overseas distribution of an English version has been confirmed by Japanese game developer CYBIRD. Its launch date is currently undecided.